My dad is a man’s man.
He is Big.
Tough.
Strong.
When we were kids, he saw that our Big Wheel’s front tire was worn out, but the back wheels were just fine. He thought to make us a go cart. Taking the big wheel in his hands, he ripped it in half. Why waste perfectly good back tires? We kids, both his own and the neighbor kids, saw him rip the sturdy toy with his bare hands. We were all amazed at his strength.
He still passes this off as no big deal. It was a big deal–ripping a big wheel in half.
He is now 76 and still strong. I have to remind myself he is pushing 80. He might be getting older?
I could tell you story after story of my dad’s strength. That’s what people see when they meet him, his height of 6’3″ his broad shoulders his linebacker sized frame– but those who know my dad know him to be gentle. Some are surprised by such gentleness from such a big man.
Again I have stories, like how he learned his strength must not get the better of him. He vowed as a young man that he would be gentle. He kept that vow.
He is a gentle giant.
Some of my strongest memories as a child are his hands working, moving tires, bricks, axels, hammering, role-modeling for my little hands the work to be done.
I copied him.
At the end of the day my hands too would be dirty and often my hands too would be bruised and bloodied from the days labor. Scars began to form.

Now the remnant of my childhood work is hard to see on my hands but my dad his hands tell a story of 3/4 of a century of hard work. I see love in those hands.

Today my father’s hands care for my mother, about 5 years ago dad replaced me as her primary caretaker. She has MS/ Parkinson’s/ Osteoporosis and a chronically good attitude. He took over to support me in the growth of my career.

To me, real toughness, real strength, is manifested in restraint. In tender touches of love.
It’s how I imagine God, ultimate strength and tender hearted for us His children beyond our comprehension.

I think of how my father’s hands reveal his work for his family, showing his love by action. It’s an easy correlation for me to see sacrifice, love, work, commitment how these qualities I would look for in a husband because I saw them in my father. It’s an easy thing for me to see my Heavenly Father committed to my well-being and when I think of my Saviors hands, marked and scarred for those He loves. It makes sense, it feels like home that God would show His children His love through gentle words whispered to our hearts. It’s easy for me to see my Heavenly Father in my life because I have such an earthly dad. 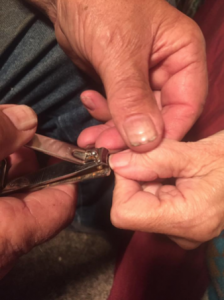