A Gift From My Best Friend.

A Gift From My Best Friend.

One of the greatest gifts Nathan gives me is he expects me to be my best self.
He has a lot of expectations as to my character, actions and motives.

When I was 19 I moved to Alaska, wilderness, Moose and the statistics of male to female made it magical to me.

Being a little more muscular than the average female, missing teeth, and an exuberant personality made me evidently a total catch in the Last Frontier!
Upon leaving a party I pondered aloud something I had just said to another girl, I wondered if what I’d just said could have been taken as hurtful. The boys around me assured me that I was a delightful and nothing I said was amiss.. how could I possibly be taken any other way but as the complete sunshine I was?! I took in their praise feeling assured.. then one young man said, “It might have been hurtful?” He looked at me, despite the flattery, I realized he was the only one in the group of men around me that valued me enough to tell me the truth.
Humbled I walked back in, as I approached my target I saw her nervously shift. Feigning eloquence I offered an apology stating I didn’t want to be hurtful when I said ____. I expressed my intent and high opinion of her. I saw as her eyes went from nervous to a glow of friendship and acceptance. It was a powerful lesson to me. I realized that many would flatter me, but few have the personal integrity to say no when it’s needed. The man that had been an honest sounding board that night.. I wore his ring for a time. I didn’t end up marrying him but the lesson he showed me made it to my list of what I wanted in a spouse.
Someone who would call me on my crap.
Think about it.. God is a big fan of us, He sees our potential, capacity and loves us more than any human mind could love. He is endlessly forgiving yet.. He sends us feelings of remorse, guilt when we step in shady directions. Simply stated God calls us on our crap. Not sure if those words should be in the same sentence.. 😳

As I dated I looked for men with the character to tell me when I’m wrong and the humility to own their mistakes that I could return the gift and provide feedback. I wanted a relationship that yes had passion, commitment AND accountability.

Every couple I’ve ever been in awe of don’t enable each other. They expect from each other a lot. Like they expect them to run their personal lives, their professional lives in integrity. Some years ago I was watching some children, the parents were deep in addiction. A conflict arouse with a message I taught the children I had not vilified the police, something the parents were doing to explain the frequent police visits. The father wrote me saying,”I had to make ____ look good even if murder was involved.” Clearly something I couldn’t do. The children were removed from my life.
Those parents were enabling the worst in each other.

This week I saw an example of spouse enabling up close again. I had been trying to help them financially and well as it is in entitled situations it wasn’t enough it moved over the line into what was extortion. They were now demanding….
In our meeting my hubby declared my fault, I’m a softy, I like to help people, I don’t judge as much as I should. Part of me was like, whoa there hubby, say how great I am! Then as I saw the mini drama unfold where no accountability was taken and they stomped out.. I found my thoughts repeatedly going back to being thankful that I have a spouse who expects me to my best. How many times has my good husband told me I was wrong. I am a better person for it.

Every single one of my best friends in life I know would slap me silly were I too slide backward in my character, they hold me to the standard I have set for myself. These friends I would add may not believe has I do but they hold me to what I believe. Every single one of them would then lovingly talk to me and push me in the right direction. Not one of them would accept my excuses. It holds me accountable. I’m thankful my husband is such a friend.. in fact he is my best friend. 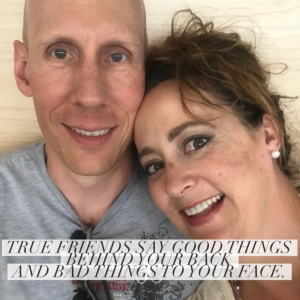