Something I learned in my daughter’s death is the difference between sympathy and empathy.

This last week, I had someone ask me how I feel about Black Lives Matter and if I liked POC. I was kind of shocked that they could watch my social media/ know me, and still wonder what my stance is.

I believe we are all equally loved of God. Period. I am trying to be like Jesus.

I’ve said this on social media long before this debate. So yes, Black Lives Matter and All Lives Matter… BUT if we put the two together it’s a case of sympathy. Of course all lives matter, but not all people have experienced the same thing. To say “we all matter” is saying, “oh yes yes, we totally get what you’re saying. Now let’s move on to comfortable topics.”

I see it in the same way as those who told me “isn’t it great you have other kids?” Or “you’re handling this well, you must not have gotten as attached to Katelynn as she died young”.
Because I’m a loud mouth, I would simply say “tell me which of your children you’d like to die and at what age?”.
They said those stupid things because they were trying to sympathize…but they didn’t get it. They hadn’t experienced that kind of grief (and I’m glad they haven’t) and they just couldn’t, as much as they tried, empathize. It doesn’t make them baby haters or bad, it just makes them ignorant of my grief.

I think the black community is asking for us to not sympathize or defend ourselves that we’re not racist. They’re asking us to lean into a conversation. They’re grieving. Every person grieves in their own way. If we truly seek understanding, we have to let them grieve and not be telling them how they should be doing it, according to our feelings.

I’ve had people find out my faith and recoil, been fired from jobs, been spat on literally on my way to church, but, here is the big BUT…these only let me understand a smidgeon…a tiny tiny bit of empathy.

I dated a black man who told me, “Every time I look in the mirror, I see me…” He just saw him, he didn’t think of himself as a black man. He continued “…every time someone looks at me I have to wonder if they see me or my color before seeing me.”

That framed a lot of how I approach this. I personally love people. All people. I love the color and variety that God made us in. I love color, I’m a makeup artist. I drool at the chance to play makeup on women of color because since moving to Utah there are far too many white faces sitting in my makeup chair.

My mother’s family comes from the south, the “N” word was used. Once I was talking to the gardener at my grandparents retirement community. Grandma called me, panic in her eyes telling me to not talk to that man as she “didn’t trust him as far as she could throw him.” I wondered exactly what that meant and how far could my elderly grandmother throw a grown man? And why would you try to throw a person? It took me years to understand she was upset I was talking to a non-white person. My mother in the days of Martin Luther rebelled got on a bus and went to walk in the Freedom Marches.
She surrounded us kids with all shades of people, so much that I was sad I was soo very white. We tout our minuscule amounts of Native American blood. By a VERY conscious effort, she raised kids who don’t judge another by color. As a result I dated seriously more men of color than I did white guys. So much so that when a friend met my fiancé she said, “He is white!”

To say a person doesn’t see color is stupid. It’s in our processing of human beings we first see sex, our brains ask Male or Female? Then on the subconscious level it’s looking at color.
In my confidence workshops, I’ve taught this with this question: It’s what you do with the information that makes you a sexist or a racist.

But to say you don’t see it is a lie.
We all see color. So what are we doing with it?

Imagine a mother holding her dead baby, grieving. And you saying “well other moms with dead babies do better than you. You should handle things better.” Or “Hey, it will all work out for the best.” ”This is just nature’s way of fixing a mistake.”

Do you get what I’m saying?

POC are tired of being told “it’s just not that big of an issue”. When we point out the protesters should have done this or that, we are missing the bigger discussion. It’s about trying to understand. It’s about stretching ourselves to a place of empathy.

I made the decision after my daughter died that people who couldn’t be nice about my daughter’s death, I was done with. I allowed distance to form and I don’t talk to them, and as they don’t like me, we can all live happily apart. But, brown people, yellow people, red people, black people don’t have that luxury of just hanging with nice people, non-prejudiced people.
They are everywhere…saying stupid, spreading stupid, and being stupid.
A stupid brain is a brain that hasn’t pushed itself beyond the ideas that naturally pop in it’s head.

In late May, I joined a resources drive for the Navajos in Montezuma Creek area of Utah, only to find out that my own Native American sister also didn’t have running water, which lead to another fundraiser for the community of Jeddito.

I’ve heard some pretty racist, prejudice things about Native Americans. I’ve also seen generosity and outpouring of love that’s humbling. People that have willing to give to those who don’t. That’s a form of empathy.
I was doing this before our national conversation broke, and though it’s pretty obvious where I stand, to be clear, if we turn down judgment and turn up empathy we will be listening and learning about things we will never experience as not POC and if we listen hard enough we might even be able to change and affect our little corner of the world. 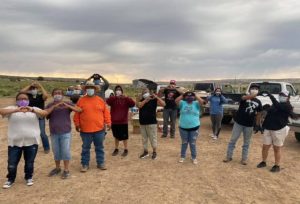