Elder Greene has returned with honor!

Elder Greene has returned with honor!

Our kids have learned excellence. They are kind, empathic, and a delight. Our greatest joy and blessing in life to Nathan and I is being parents.
Nathaniel has been serving a mission, and we have been immensely proud of him. When he fretted, we praised him for trying and working so hard.
Several weeks ago he began having stomach issues. He continued to work and worry that he was slowing down the work. We assured him he was doing just fine. We were proud of him. God doesn’t expect perfection, but Nathaniel was expecting that of himself. He expressed his love for Colombia and the people there, and we remembered our own missionary service. When he expressed concern for his mental health, we encouraged him to tap into the resources available to him in the mission. I myself had counseling on the mission, and it was a blessing to me.
As he received medicine, therapy, and a great new companion that we had told was such a great missionary, we felt hope for his recovery in the mission. His stomach issues were finally improving after 8 weeks of having them. He was doing well. We know our son, we know his capacity and his fortitude. We have felt the awe of who he is and the honor to be his parents.
But what we didn’t fully understand was what Nathaniel was feeling and all of his mental processes. He was fighting a battle. I’ve shared he has Tourette’s Syndrome just like his dad, and he was additionally just diagnosed with anxiety-induced OCD.
Nathaniel had a severe panic attack and was not himself. Had he not had an overwhelming sense of love for us, the worst could have happened. It just so happened that when he messaged us immediately after this, we had a therapist sitting in our living room. We have had every resources available to us to learn that we were missing something Nathaniel was already telling us. These demons were getting bigger.
Yesterday, Nathaniel came home to us and we will all be working to understand and support him. If Nathaniel had never gone on a mission, the OCD that was there with the Tourette’s would very likely have gone unseen and thus untreated. Because he went ready and willing to serve, the regimented life of the mission and the weighty expectations placed on him was a serious trigger to the OCD we all didn’t know was there. Now we know. Knowing is a gift, an opportunity to learn to do better.
He will get to decide if he wants to continue his time as a missionary or if he is ready to go to the next chapter of his life. As far as we are concerned, we consider the time he has served as a triumph. He has given his all to this missionary work. He has dealt with physical health, emotionally having to be alone in his challenges and all the while wrestling with the demons of mental health. He has done all this and done the work of a missionary every single day. Now he needs to rest and heal up for the next steps ahead. We don’t know exactly what those are, but we are confident in Nathaniel’s capacity to go forward well. 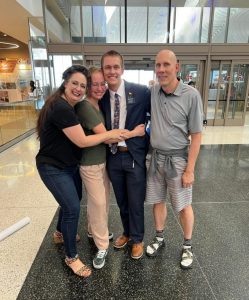