When Loverman and I were first married, like most couples, money was tight. Our families had very different ideas about money, so we knew we needed to communicate and plan how we would handle money. In one of these discussions I mentioned we needed to plan for a pair of black boots. Every other spring is hit a sale to buy a pair of fake leather boots. They were essential to my winter wardrobe, but as they were fake I usually only got two winters from a pair.

I explained all this and thought it made perfect sense. Women you get me on this.

We need these fashion basics.

The man I love and adore was baffled on several levels.

Why every other year? Why not just get leather? I explained how expensive a pair of black boots were, and as he began to understand– or so I thought, he lit up and plopped a pair of army boots in front of me. Our feet size is very close, and these were quality leather, extras he could do without and I could have them! I just about lost it! Women you get me. I reminded him of phrases like “your momma wears army boots” that are not meant to flatter and I let him know they were so not sexy! Did I mention how not sexy they were?! 😭

Being a trained engineer, a military man, and an analytical thinker he didn’t understand my willingness to walk away from quality for something like aesthetic.
He did write in our budget the fake black leather boots. That was the end of it. I was silly but he realized I was not going to wear sturdy practical army boots. He put up with my aesthetic a lot, as I refused to buy a couch till I could find one I liked for a deal. So for a year and half we invited guests to sit on pillows. Very international of us 🤣

I never went without my fake black leather boots. 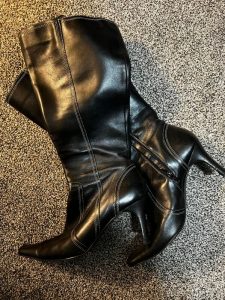 Ten years later, after he served in the military, law school, 9 pregnancies, 7 miscarriages, and 7 moves later we were now living in Utah and he had the job we had worked for all these years. The firm had flown us to Chicago for an event; fancy hotel, fancy food, we were feeling pretty fancy. We had an afternoon after sight seeing with his co-workers and Loverman said we had plans before a night to the theater to see the musical Wicked. He knew where he wanted to go, I was happily following as I love walking around in places I haven’t been. Soon we were in store standing in front of tons of women’s boots, and Nathan told me I needed to buy some quality black leather boots.

We still had a lot of debt, just bought a house, had two little kids but he remembered that this, however silly, was important to me. Conversely, I made him buy some blazers because he was a fancy lawyer now.

I love these boots. I love them not only because we had to wait to afford them but because even if he doesn’t get my need for sexy black boots, he gets me.