When Things Don’t Go as Planned

When Things Don’t Go as Planned 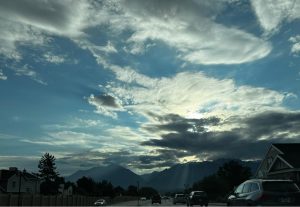 Can you see it?

Where those rays of sunlight poke through the clouds, it’s like a beam from heaven is touching earth.
I love it when the sky is like this, so much so that on my way to get an oil change I had to snap a picture.
Josh-Kymber Jasperson was there getting work done on his vehicle too. Soon we were chatting. He mentioned his wife had died, he didn’t say it for sympathy, just part of the story he was telling me. I confirmed he was younger than me by a couple of years and I thought there should be a rule that no one dies young.
Soon our conversation lost all newness of knowing each other and we were conversing as what we really were, two souls connected by loss, faith, and a knowledge of God’s goodness.
There at our favorite garage, Performance Place on Redwood Road, the heavens touched the earth in the form of a new connection, his wife Kymber and my Katelynn close.
There was a miscommunication with my family on whether I was waiting for the oil change or if I was to be to picked up. In hindsight it was just as it was meant to be, if I had been picked up as planned, our conversation wouldn’t have had the time to go where it did. And my new brother Josh was kind enough to give me a ride home.

Sometimes, a lot of times, things do not go according to plan— but I believe it’s in those times — if we look around we will find a gem placed just in that unanticipated spot meant to enrich our lives.