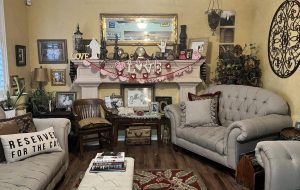 I took down Christmas and put up Valentines.
Yes it was s little much for my foot, but I did it. Why? Because I am really into decorating. At night one of my turn-my-brain-off exercises is to visualize my home in order and I find that soothing.
Some could say I’m excessive in my decorating. None would say I’ve kept it simple

I used to spend hours paying the bills, I hated it. Like stressed. Nathan took over and does what I once did with an efficiency that’s annoying. Right now he could tell you the exact state of our finances, because of that if I have an expense outside of the budget we talk. It may look like he controls the money, like how I control the decor.
I also do more laundry, more cooking and other domestic tasks. Oh no! Our marriage had fallen into traditional roles!
Not fair you may cry, I have a career too! How dare he expect a dinner time.
Here’s the thing though our marriage not only works for us, when in times of decreased mobility, like what I’ve just gone through, and has happened before, without a conversation or request Nathan will do more of the domestic things. When I go out of town for work, not only does he keep the home running he often tackles a project. I don’t demand it, he just does it. Yes, I could get fluffy about the dishes not getting rinsed and placed in the dishwasher, and sometimes I do

The facts are he will role up his sleeves and load the dishwasher, he just doesn’t do it the same way I do. He takes care of the money because he has skills and an analytical mind, he is better at it. Not because he is a man – its simply because, I am not suppressed for allowing him to do the tasks he is better at in our team.
When talking about different roles in marriage, women tend to do more of the domestic stuff because we care more about how it’s done. There are exceptions and that’s for each marriage team to figure out that balance.
Growing up there was “men’s work and women’s work and women could do both.” Men didn’t do dishes. Men seldom cooked. Men didn’t do laundry.
I vowed a million times as a kid that my husband and I would have even/ fair/ split of domestic tasks.
I was bitter that maintaining my childhood home was on me. My parents even formalized it by making a deal with me that if I took on all domestic tasks they’d pay for college, a promise they didn’t keep.
By the time I got married I saw domestic duties as a trap. I had a history of built up reasons to resent domestic duties.
Then one day while I was cooking dinner, I felt quite irritated as I’d cooked dinner more that week than had LoverMan.
Then I did the math, we had no kids then, we both worked. So even there. But when you factor hours, he had worked more hours.
I remembered how I’d reprimanded him for not folding the towels correctly.

It hit me, I cared more about how these tasks were carried out, and Nathan cares more about the nooks and cranny’s of our finances.

So call it traditional gender roles, call it specializing in tasks depending who was better at each —  look at whose better at it and allow the other to do that task to their skill set without criticism. Otherwise that friction brings down the efficiency of your team.

He lets me decorate to my heart’s desire. I let him make our money work awesome. We’re a team, we are working not just towards efficiency but a goal and we’re doing that together.